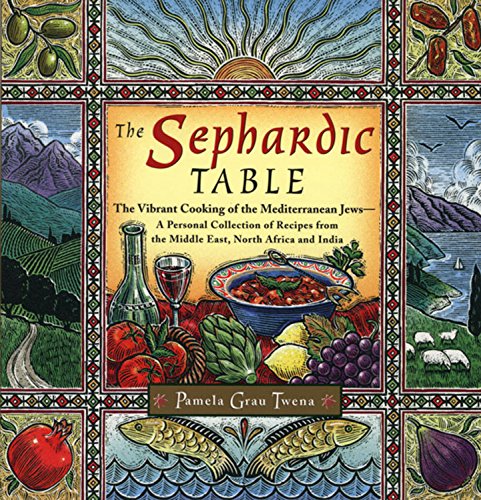 So with all these Christmas recipes that I’ve been posting you probably think that Christmas is the main holiday that is coming up in my life. Nothing could be further from the truth, you see I don’t even celebrate Christmas, but since the food is non-denominational like the rest of the country I consider it part of my national heritage. Being of the Jewish (and kosher) persuasion I don’t prepare ham and garlic pork though, so those who have reached this site looking for those recipes I do offer my humblest apologies but I have to draw the line somewhere! 🙂

So now that I’ve mentioned Judaism you can then presume (correctly) that in the midst of posting these traditional Trinidadian Christmas recipes I am also preparing my own lesser known Caribbean Hanukkah menu. Which is where the above book comes in very handy!

focuses on the cuisine of the Jews of Southern Europe, the Mediterranean, the Middle East, North Africa and India. I enjoy this book because being of Sephardic descent I try to bring this ancient heritage into focus as much as I can. Most of the books coming out of the US seem to focus on Ashkenazic heritage and cuisine (i.e. that of the Jews of Northern and Eastern Europe). Unfortunately since boiled beets, noodles and potatoes is not really my idea of culinary heaven this leaves me feeling rather left out.

The dishes in The Sephardic Table: The Vibrant Cooking of the Mediterranean Jews

are much more familiar to me because they draw on the cuisines of the communities who came to populate Trinidad throughout its long history of immigration. Spices such as cumin and coriander abound. Seafood dishes and vegetarian options are plentiful, and there are even menu planning guides for the major holidays.

As I’ve been asked to provide some of the savory offerings to this year’s potluck I’ve been thumbing through it even more intently recently and I think I’ve narrowed the possibilities to the following fave dishes that Twena offers.

Being a Sephardic book Twena does not mention latkes (an Ashkenazic Chanukah standard and a fave of mine as well). However, because Chanukah is the celebration of oil, and I’m not doing desserts this time around, I will probably make a batch of latkes as well (if not for the potluck, for my own celebration). Of course you know I’m gonna have to put my Trini-Sephardic spin on them, so I”ll probably add some spices, sweet potatoes/carrots, cilantro, hot peppers… you get the idea…

Once I’ve finished the final plan I’ll be sure to let you all know! 🙂

Pamela Grau Twena’s introduction to Sephardic culture began on a blind date. Her future husband came from a family of Iraqi Jews who had immigrated to Israel. She was a non-observant Jew from Hollywood whose encounters with Jewish food had been limited to her grandmother’s matzoh ball soup, a semiannual brisket, and an occasional cheese blintz. Twena’s mother-in-law ushered her into a world of flavorful dishes. Captivated, she coaxed out the recipes, which had been passed through generations but never written down. Beginning with her husband’s extended family, she went on to interview members of the Sephardic community (the term for Jews with ancient roots in Spain), persuading them to open their kitchens to her and divulge their coveted recipes. The result is a collection of 175 of Twena’s favorite recipes from Morocco, Libya, Algeria, and Tunisia in North Africa; from the Ottoman communities of Turkey, Rhodes, and Greece; from Syria, Lebanon, Egypt, Iraq, and Iran in the Middle East;