I normally don’t enter one of my recipes to multiple events but I’m in a bit of a time crunch and I really wanted to take part in Food In Film, as well as “Waiter There’s Something in my… Meatless Barbecue”.

Having been a Film Major in college my eyes really lit up when I learned about the Food in Film event, there were so many great films I could choose from, and talking to a close friend only brought up more possibilities. For some reason my mind really was motivated to come up with a ‘Clogger’ a la the Simpsons movie, but my own kashrut restrictions got in the way of really staying true to the name. I really hope that another participant comes up with one though 🙂 In the end however my ‘Clogger’ brainstorming led me to another animated film’s famed burger, the infamous Krabby Patty, immortalised in film thanks to The SpongeBob SquarePants Movie 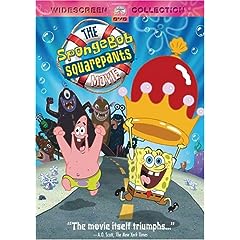 I am not ashamed to say that I am a huge Spongebob fan. I am probably the only maid of honour to have been thrilled to have received a Spongebob DVD as part of my wedding party present 😆 When I first began to watch the TV series I thought that Krabby Patties were made from crabs, but then I realised no they just got their name from the store owner Mr. Krabs …

Krabby Patties are a central part of the Spongebob Universe and play a pivotal role in the movie as well. Indeed this burger was inspired by the following scene.

From Wikipedia:
The film begins with a live action credit sequence, in which a group of pirates retrieve tickets to The SpongeBob SquarePants Movie. The film then cuts to Bikini Bottom, where amidst chaos, Mr. Krabs, the boss of popular fast food restaurant the Krusty Krab, has a problem: a customer who ordered a Krabby Patty got it without cheese. Suddenly, SpongeBob SquarePants, the manager, comes to the rescue. With his briefcase full of James Bond-like gear, he takes out a piece of cheese, slowly puts the cheese in the Krabby Patty. and the day is saved.

Now when making a veggie burger there is nothing to be gained by continuing to convincing yourself that it is really a meat burger in surprise. Can we just be honest and admit that they are night and day? That doesn’t mean that I don’t love veggie burgers (when they are done right) I do, but I think that the key to making a good veggie burger is treating it as one, and not as a meat burger in disguise.

Because veggie mince is basically dry and flavourless it is important to add as much moisture and complex flavours as possible. I decided to achieve this through the addition of smoked cheese stuffing, garlic sauce and hickory BBQ sauce. The other main problem with veggie burgers is binding. Here I used two eggs as well as wholewheat flour and seasoned breadcrumbs. These additions create a burger that is extremely dense and nutty, with an array of flavours throughout. When topped with coleslaw (added moisture), grilled onions and tomatoes the flavour medley becomes unbelievably dynamic and satisfying.

For toppings:
1 large white onion (slice into 4 thick slices. Brush with 1 tbsp of Italian dressing on each side. Grill for 5 minutes per side. Set aside)
1 large tomato
1 cup shredded cabbage (combined with 2 tablespoons mayonnaise) 5. Form 4 additional patties with the remaining mince mixture
6. Place over the patties and cheese, sealing the edges to ensure that the cheese doesn’t seep out (won’t always work tho 😛 )
7. Sprinkle liberally on each side with salt and pepper 8. Grill for 7 minutes per side
9. Top with remaining 4 smoked cheese slices and allow to soften
10. To assemble the burgers place 1-2 teaspoonfuls of coleslaw onto bun base.
11. Top with burger patty, a slice of tomato and grilled onion (separate the rings).
12. Top with bun and serve